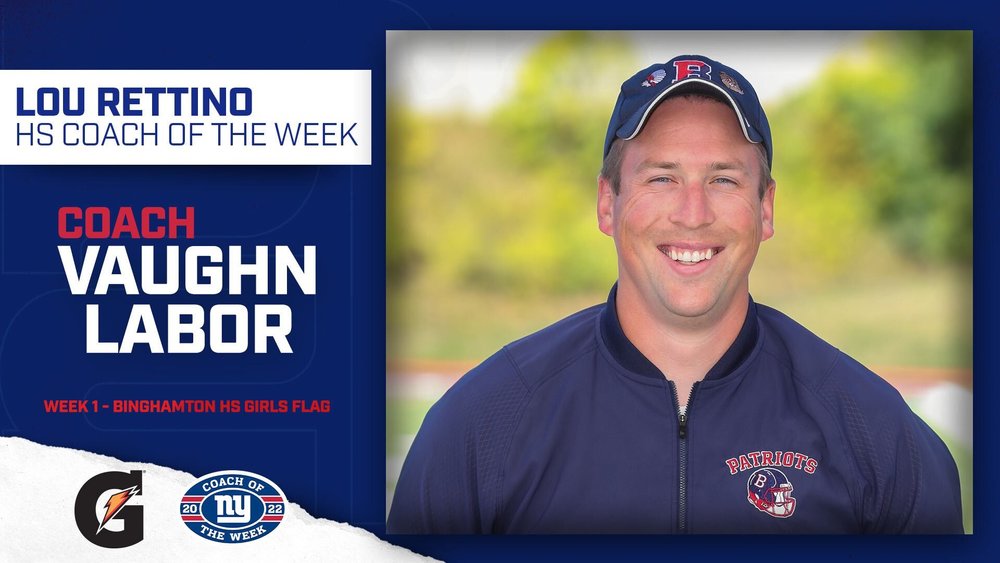 The New York Giants and Gatorade have selected BHS Coach Vaughn Labor as the Lou Rettino High School Coach of the Week for Week 1 of the 2022 season. Labor is the head coach of the Binghamton Patriots girls high school flag football team that won the Section IV championship in the inaugural season of the new spring sport. The Lady Patriots ended the year with a 5-2 record, including winning the championship game over Union-Endicott by a score of 26-12. Union-Endicott narrowly defeated Binghamton 38-31 in week four of the regular season. The Giants were pleased to help support the launch of the pilot league for girls flag in the Spring of 2021 with seven teams participating.

The Lou Rettino High School Football Coach of the Week Award is part of the Giants’ continuing effort to support local high school football programs. The Giants elected to name the award in memory of former Union High School (NJ) coach, Lou Rettino, for his fine commitment to the game of football, his community, and the betterment of his athletes’ lives. Each week during the high school football season, the Giants selected one area high school head coach as the Coach of the Week winner. The selection is based on the coach’s continuing commitment toward promoting youth football, developing motivated student-athletes, and contributing overall to their community.

In recognition of  Labor’s selection as Coach of the Week, a $2,000 check will be granted to the school’s flag football program from The Giants Foundation and Gatorade. He will also receive a certificate of recognition signed by Giants head coach Brian Daboll, and will be honored at a dinner following the season, as well as a 2023 pre-season home game.

In addition to coaching the girls flag team this year, Labor has served as an assistant varsity coach at Binghamton High School for 10 years and played college football at SUNY Cortland. He has also served as a social studies teacher in the Binghamton City School District for nine years.

Labor is thrilled to have the chance to coach this team and is even more excited about the future of the sport. “Creating more opportunities for kids to participate and belong will lead to more kids finding success,” said Labor. "To jump into a brand new sport and ask questions and learn the game and then win a championship at the end of it, that's just a testament to them. They’ll get to say to the girls down the line, in ten, fifteen years, when this is hopefully a state-sponsored sport, we were the first Section IV team. We were the first to do it."